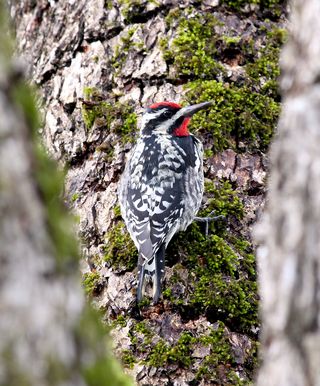 The hundred-foot pines behind our home and the underbrush they shade, is home to red-headed woodpeckers, red-naped sapsuckers, brown thrashers, the noisy and always aggravating grackle, white tail deer and a bunch of squirrels.   Once, a broad-winged hawk paid us a visit.

Yesterday was special.   Sleek and beautiful showed up to wait quietly, at least for most of a long moment in the open field alongside the pines.  It was one we rarely see, a red fox.  When he eased out of the trees and into the open, he took a few measured steps and stopped.  He didn't look as though he intended to waste much time away from cover.  But, he didn't seem all that much in a hurry either.

As he surveyed his surroundings, I watched him and wondered.  If a fox could talk, what would he say?  With grandchildren and the books you read to them, imagining talking animals is not all that hard to do.  In fact, in a child's world, it happens all the time.

As the fox traversed the open field and eased his way through a wooded area, on to the pond for water, he left me this message:

The direct route is not always the best route.

When you move, move with dispatch.

Stealth is not always a bad thing.

Learn the value of being still.

Enjoy your goal when you reach it.

When you're done, leave.

Are They Listening to the Neighborhood? 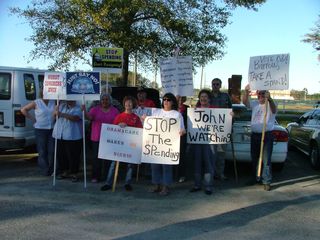 We all know at this point in the presidential election that a crowd of authorities have stepped up to analyze, measure, discuss, tabulate, speculate, poll, question, second-guess, and otherwise entertain us, with their "take" on what is obvious to us.

My study is neighborhood-based rather than scientific.  It is down-home rather than sophisticated.  It was conducted over coffee rather than with a computer.  I have no way to calculate the percentage of error.  I have no reason to invoke the mystery of science for authority. We, you and I, are people.  We have brains.  We can think on our own and make choices.  We do it every day.  The only authority I have will occur when and if what I'm saying rings true for you.

Basically, it's simple.  Talk politics today and you find two groups.  The true believers, both Republicans and Democrats, are enthralled with their person no matter what.  They vote as they always have no matter what.  Within the true believers group are those new to the voting process. These folks are the audience.  They are props in theater seats at an alleged debate, hoping to grab an autograph at the end of the political show.  They are simply enthralled.  They faint at the presence of their icon of choice.  They applaud when the would-be leader blows his nose.

The second group is made up of what were once true believers, who figured out that the person at the top goes deaf not long after coming to power.  They realized long ago that the leader follows drumbeats that have little to do with the neighborhood, and a lot to do with the power that always surrounded him, but swamped him following election.

This second group has many names.  They are called Independents, the disenfranchised (don't you love that word), swing voters or....... just plain angry.  Talk to these folks and you will hear a line you don't and won't hear from your favorite political analyzer T. V. personality person........"We don't have a choice."

It's scary, isn't it?  Once upon a time there was a floating center, kind of an open middle ground. Good citizens vote, we told ourselves.  And, those who managed to hear through the propaganda-campaign messages that prepared the way for the next string of broken promises, would vote for the lesser of two evils.  More than a few over their voting life have voted for one candidate in an attempt to vote against the other.  The line went something like this, "I really don't like either of them but, I dislike him less. I’ll vote for him."  I know that doesn't sound too American-dreamish, but it did and does happen.

Enter the eternal campaign of 2012.   If we listen to the current siren song, we would be lead to believe we are on the cusp of a new day, maybe not a chicken-in-every-pot, but at least a pill in everyone's pocket.  Oh, happy day.

Is it possible that the next president, the next commander-in-chief, regardless of who it is, has already fumbled the ball so badly that they are doing the last thing they would ever think of doing .......creating a third party?   My guess is, if enough people go long enough without a choice, they will find one.

If My people, which are called by My name, shall humble themselves, and pray, and seek My face, and turn from their wicked ways; then will I hear from heaven, and will forgive their sin, and will heal their land.